Although you may already have some ideas in mind for using this feature, we’d like to mention two situations in which it might be useful:

The following sample script performs an Oracle initialization of some NLS session variables. After that, a PL/SQL block is used to query the logged-in OS user name and pass it to your business logic:

The login script may contain input parameters such as :PARAMETER. Hora queries them before executing the script. If the paramter name equals PASSWORD or starts with ‘_’ the input is hidden as usual for password input. 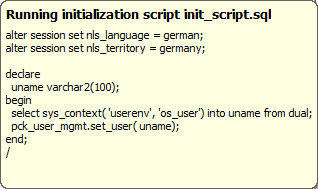