KeepTool 12 introduces various new features. Hello again and welcome to the March 2016 issue of the KeepTool newsletter, Keeping in Touch. In this issue, we’d like to introduce you to KeepTool 12, which offers additional support for Oracle 12c as well as for the depiction of Oracle Spatial data. We’ve also instituted a new, easier licensing process and made the user interface blend in with Google’s Material Design standard.

KeepTool 12 introduces a new Free edition with most of the functionality of the former Light edition. KeepTool Free is absolutely free to download and distribute.

Two years ago, we bundled our products in three editions: Light, Professional and Enterprise; each addressing a specific user profile. This successful realignment is now being modified slightly: we have decided to release a new Free edition that includes the most essential features of the former Light Edition.  If you are a Professional or Enterprise customer, you may wish to consider distributing the Free edition to your customers as a free querying and reporting tool.

All editions are available as 32- and 64 bit-runtimes.

KeepTool Free can be used free of charge. The two commercial editions come with a fully functional 30-day trial period. For unlimited use, you can purchase a full license or an upgrade for the prior Version 11. Either way, you get:

All commercial licenses are available as network or workstation license and are managed through CodeMeter.

The licensing process has now been greatly simplified through the implementation of Codemeter. When you purchase a license, we’ll send you a ticket consisting of a string of alphanumeric characters that will allow you to use the software on your computer. Simply enter the ticket code in our KeepTool License Manager, which will take you to our License Depot. The Depot will also let you exchange a license if you ever want to move the software to another computer. Alternatively, customers without an active Internet connection may also take advantage of a file-based activation process.

To accommodate those of our customers who maintain network licenses on virtual machines, in the second quarter of 2016 we will give them the alternative of tying their licenses to pluggable hardware (dongles). Accordingly, licenses can be easily transferred within the computer center without having to use the cloud services.

These features are available when maintaining table columns, while editing data, and within our DDL generation engine.

KeepTool 12 introduces a new look and feel. All button images have been repainted to blend seamlessly into Google’s new Material Design. The skinned user interface is now enabled by default, showing fewer edges and lines than before.

Some significant functional enhancements simplify your work; here are just a few examples:

See the Release Notes for a complete list of changes.

Oracle Spatial support has been improved. The following new features have been added to the “Schema | Spatial Columns” page:

A new Open Street Maps viewer can be opened from the Data Contents view. 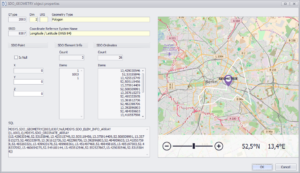 In the “Create Table” dialog, the “Add stamps” tab lets you add several pre-defined columns to the table, e.g. timestamps for record creation or last change. KeepTool 12 now lets you freely customize these columns and save the new column set as the default for future use. 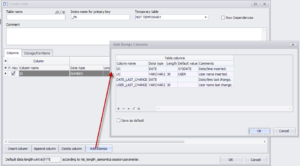 The order of table columns now can now be easily modified by dragging and dropping the triangular indicator preceding each column name.

The “Row Dependencies” check box allows Oracle’s row-level dependency tracking option to enforce storing the SCN in the pseudocolumn ORA_ROWSCN for each changed data row instead of storing it only for the data block.

To display the ORA_ROWSCN pseudocolumn in the Data Content view, open the column selector popup and check the box indicated. If you sort the grid view by this column, you will have an idea of which rows may have been recently changed, even if your table does not have timestamp columns for change logging. It may be a good idea to enable Oracle row level dependency tracking as described in the previous paragraph. Otherwise, all rows that are stored in the same data block will share the same SCN. 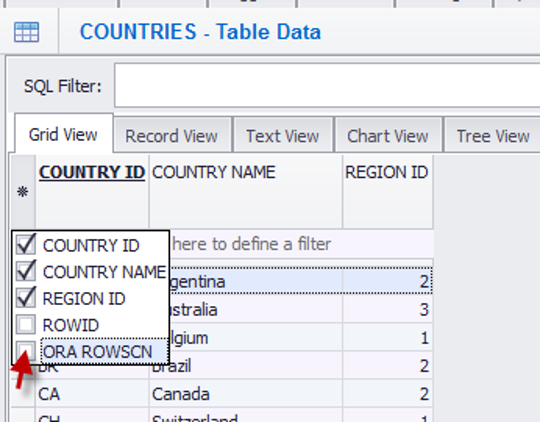 Another highlight of the new version is that the Data Content view now permits flashback querying. The button resembling a clock opens a dialog box where you can enter a flashback expression, for example to see historic data as of the beginning of the current day:

KeepTool 12 now uses bold fonts for headings of columns that are part of a primary or unique key constraint. Headings of required (not null) columns appear underlined.

There are two new menu items that appear on the tree view tab sheet when right-clicking on a node:

The list of procedures within a package has been moved to the left side of the editor window:

This provides for straightforward navigation through the hierarchy of

The navigator shows a solid bullet in front of public methods and a circle in front of methods that are declared in the body only.

KeepTool 11 introduced the context menu items (and shortcuts) “Selected object | expand SELECT / INSERT / UPDATE / CURSOR-FOR-LOOP” to create the appropriate SQL statement for a table name selected in the editor. KeepTool 12 now adds a list of check boxes that can be used to specify the column names to be included into the query. 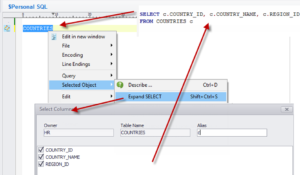 The “Code Snippets” and “DB Object Browser” floating tooltip windows have now both been embedded into the editor. The new version of our DB object browser lists the selected schema’s tables, views, packages procedures/functions and sequences on separate tabs. When you drag-drop an object name into the code window, a popup menu appears, giving you a choice of different code types to be generated such as a SQL select statement or a PL/SQL call. 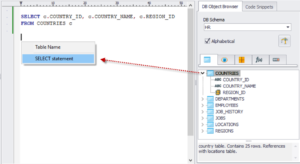 The second tab, “Code Snippets,” allows you to drag-drop predefined code snippets into the editor window. The templates can be customized by editing a configuration file.

The Explain Plan dialog that is available from the editor window has been updated as well. In addition to an improved layout, the facility now shows inactive plan branches produced by the Oracle 12c Optimizer Adaptive Features as grayed.

The new Status | Time column indicates how long the session has been in the current status. You can now see the progress of long running queries right on the Overview page, which displays the top entry from the Long Operations tab sheet.

The new version allows you to switch directly between single-instance view and multi-instance view using a check box. Previously, in Hora 11, switching required a change to your settings.

Our new Free Edition contains the Hora Free application. This is a compact successor to Hora Light that has been designed for end users who are focused on data entry, mining, and reporting. 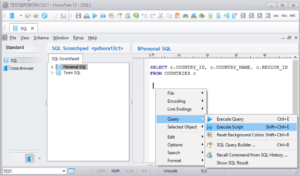 Download our free trial and get familiar with KeepTool 12 new features.